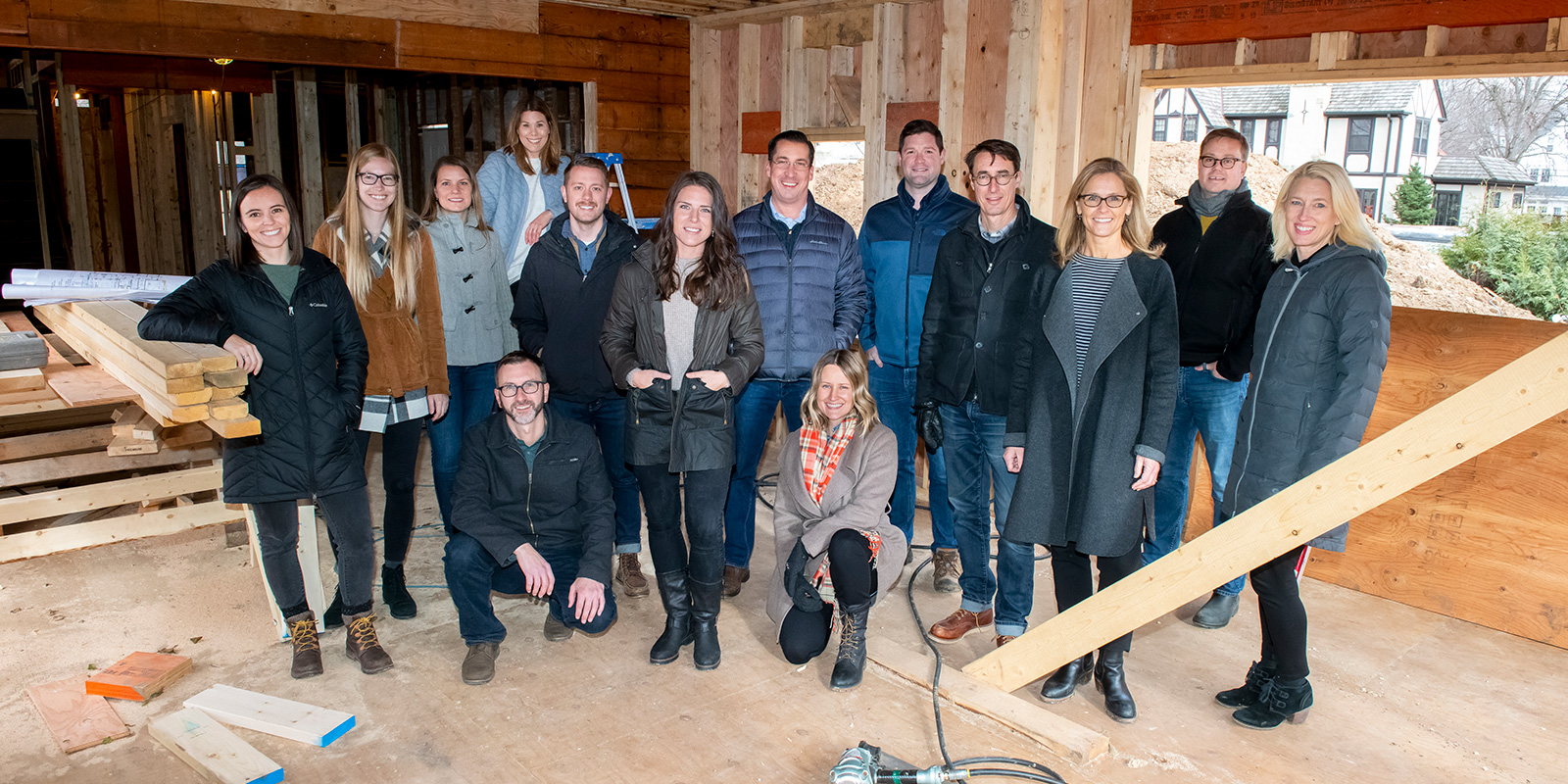 Our studio is located at 2732 West 43rd Street in Minneapolis, near beautiful Lake Harriet in the Linden Hills neighborhood.

Call 612-285-7275 or email info@rehkamplarson.com for more information, or to tell us more about your project goals. We look forward to hearing from you!

Mark co-founded Rehkamp Larson Architects with his wife Jean in 2000 following his entrepreneurial spirit and dedication to design. After receiving a B.A. from St. Olaf College, Mark earned his Master of Architecture degree from the University of Minnesota in 1992. Prior to founding the office, he worked in the offices of Vince James, The Leonard Parker Associates, Julie Snow Architects and HGA. Mark is the recipient of the 2016 Architect of Distinction Award from AIA Minnesota. He also received the AIA Young Architect Award in 2005, and was described as having “a growing dedication and an intensity for enlightening those around him about the discipline and delight of architecture.” Mark is a licensed architect in Minnesota, Wisconsin, Nevada and Oregon.

Mark is committed to collaborating with other professionals in the community to better connect people with architecture. He has served as Chair of the AIA Minnesota Residential Architecture Committee, steering committee member of the Architecture and the Psyche Symposium, and jury panelist of various local and national residential design competitions. In 2003/04, Mark co-presented lectures on Carl Jung’s house at the Minneapolis Institute of Arts and the International Jungian Congress in Barcelona, Spain. Mark has lectured locally on cabins, renovations and the design process. He enjoys the opportunity to mentor students and is currently assisting in the development of an architecture course at St. Olaf College.

When not at the drawing board, Mark can be found at the tiller of a sailboat, plein air oil painting, or behind the lens of a camera.

Jean cofounded Rehkamp Larson Architects with husband Mark Larson in 2000 with the vision of an inspired, collaborative, client-focused residential design practice. Projects vary in location and scale, from a small urban remodel to a new rural or lake house. At the core of this work is a passion for the creative process of designing good places to live. Rehkamp Larson Architects, a firm of 14 people, is located in south Minneapolis. Jean is a licensed architect in Minnesota, Iowa, Utah, Nevada and Florida.

In 2000, Jean was a recipient of the AIA Young Architect Award and in 2006, Jean was named Emerging Talent of the Year by Midwest Home magazine. Her work was described as “very down to earth, with a beautiful kind of elegant simplicity to it.” Jean is also the recipient of the 2019 Architect of Distinction Award from AIA Minnesota.

Jean is the author of The Farmhouse: New Inspiration for the Classic American Home (Taunton Press 2004). This book stems from her interest in the principles of rural design and explores 20 modern examples. As a founding counselor of the Congress of Residential Architecture (CORA) and an active participant in the Custom Residential Architects Network (CRAN) of the American Institute of Architects (AIA), Jean connects with a broader national community of professionals in residential design.

She received her Bachelor of Architecture degree from the University of Minnesota. A native of rural Marshall, Minnesota, Jean now resides in the southwest metro with her husband Mark and their two sons, Andrew and Peter. Yoga and watercolor painting provide balance in a full life.

Ryan graduated from Iowa State University in 2001 with a Bachelor of Architecture degree. Before joining Rehkamp Larson Architects in 2003, Ryan spent two years at Hammel, Green & Abrahamson, Inc. in Minneapolis, and worked as an intern in the offices of RB+B, Fort Collins, CO. and Jensen Design Build, Ames, IA. Ryan’s prior project experience includes arts, cultural, and educational facilities. Ryan received his professional architecture license in the summer of 2008. A native of Sioux City, Iowa, Ryan currently resides in South Minneapolis with his wife Katie and three children, Maisie, Claire and James.

Before his start at Rehkamp Larson Architects in 2006, Ryan spent two years on multi-family and hospitality projects at ESG Architects. He has also spent time as an intern with the marketing and design firm Shea and as a field engineer intern with M.A. Mortenson. Ryan attended the University of Minnesota and received his Bachelor of Science in Architecture in 2002 and went on to earn a Master of Architecture in 2004. In his free time, Ryan enjoys working on his home in Eden Prairie and spending time with his wife, Amanda and children Lily, Kate and Will.

John received his B.A. degree in Architecture from Miami University (OH) in 2001 and Master of Architecture from the University of Washington in 2005. He previously worked at Glaserworks in Ohio and Mulvanny G2 in Washington, and headed up his own architectural firm in Minneapolis for six years before joining Rehkamp Larson Architects in 2016. John is interested in studying local customs and vernacular forms of housing while traveling throughout the Americas and Europe. John enjoys playing guitar, scuba diving and swimming (he once swam head-to-head against Michael Phelps), and lives in Minnetonka with his wife Nicole and kids A.J. and Madeleine.

Anders has led a varied career as research assistant in Antarctica and Iceland, ship’s engineer aboard sail training vessels, and high school math and science teacher. He ran his own design/build firm before joining the office in 2014. His studies have taken him around the world to Hungary, Vietnam and Turkey.  As part of his graduate work, Anders created housing with the Gulf Coast Design Studio along the Mississippi Gulf Coast after Hurricane Katrina.  Anders received a Master of Architecture in 2010 from the University of Minnesota. In his free time, Anders enjoys kayaking, cross country skiing, and cooking with his wife Megan.

Angie joined the Rehkamp Larson staff in 2011 as a student intern, and joined the office full time in 2013 after completing her Master’s degree at the University of Minnesota. As part of her studies, Angie spent time in Biloxi, MS as part of the Gulf Coast Design Studio, and was also part of a team that designed and built a “zero energy” Habitat for Humanity house in the summer of 2011. In her free time, Angie runs a small jewelry design business, enjoys yoga, and spending time with her six nieces and nephews. A native of Minnetonka, MN, she currently lives in Northeast Minneapolis with her husband Chris.

Kathleen joined Rehkamp Larson after graduating from the University of Minnesota with a Master of Architecture degree in 2017 where she was awarded the Bill & Elizabeth Pedersen Fellowship and the AIA St. Paul Fellowship Award. Kathleen previously worked for Workshop/APD based in New York as well as HCM Architects of Minneapolis and BWBR of St. Paul. With a special interest in modernism, she is part of the Minnesota Docomomo organization promoting the documentation and conservation of the modernist movement. Although having lived in five states growing up, Kathleen considers the Twin Cities home. She lives with her husband, Ross, and cat, Slim Jim, in Minneapolis and enjoys biking, kayaking, swimming, and traveling, often to Minnesota state parks or exploring new countries such as Cuba, Jordan, the United Arab Emirates, Iceland, South Africa, China, and around Europe.

Laurel earned her Master of Architecture degree at Kansas State University in 2013 where (as the second-ranking graduating student) she was awarded the AIA Certificate of Merit in the Study of Architecture. With a passion for the environment, she earned her Master of Science in Architecture – Sustainable Design at the University of Minnesota in 2016. Her interest in sustainability and zero energy homes led her to compete in the U.S. Department of Energy Race to Zero Student Design Competition, where she was the University of Minnesota’s team design lead and presenter. Her team won the Grand Award (1st Place) for their affordable Zero Energy Home in 2015. Before joining the office in 2015, Laurel spent over two years at LHB as intern and Designer.

Laurel received her professional architecture license in July 2019. In her free time, she enjoys gardening, hiking in the mountains, cruising the MN bike trails, cross country skiing, canoeing in the BWCA, road tripping to National Parks, and getting out climbing/bouldering as often as possible.

Corey joined the Rehkamp Larson staff in 2018 after spending five years working on office renovations, gallery spaces, and high-end residential projects for SKD Architects. He completed his Bachelor of Design Architecture at the University of Minnesota in 2010 and earned his Master of Architecture from Southern Illinois-Carbondale in 2017, focusing on sustainable recreation and education centers. In his free time he enjoys hiking, soccer, patio season, concerts, and dog sitting for co-workers.

Tyler graduated from Dunwoody College of Technology with an Associates degree in Architectural Drafting and Design and a Bachelor of Architecture degree in 2018, where he was awarded with the Academic Excellence Award. While attending Dunwoody he worked as an intern at RDS Architects and Alliiance. Following graduation he continued his career at Alliiance, working on aviation projects at Minneapolis-St. Paul International Airport. Tyler received his professional architecture license in the spring of 2021, and shortly after joined Rehkamp Larson Architects. In his spare time, he enjoys camping, playing drums, running, and spending time with his wife Annamarie, and their two cats, Archie and Bandit.

Jeremy graduated from the University of Minnesota with a Bachelor of Design – Architecture degree in 2013 and a Master of Architecture in 2016. While in school he had the opportunity to complete a year-long research effort with AECOM (Advisor: Kathleen Harder, PhD) as part of the newly developed MS – Research Practices degree program that sought to bridge the gap between academic research and professional practice to address current problems in design. Prior to joining Rehkamp Larson Architects in 2021, he worked as an independent carpenter and designer in Boulder, Colorado, and in Minneapolis. When not in the office, you can find Jeremy out running, traveling far and wide, or restoring old houses.

Karla joined the office in 2012 as our Business Manager. With an architect for a husband and four kids, she’s well skilled at keeping the office organized and all of us in line. When she’s not at the office, she spends her time chauffeuring kids to hockey practice and enjoying time with her family. Karla lives in South Minneapolis with her husband Chad and their children: Erik, Ella, Maren and Makayla.